Speaking of wordless books, I was reading one of the Caldecott Acceptance speeches author/illustrator David Wiesner gave and I loved this context he offers on his book Tuesday: 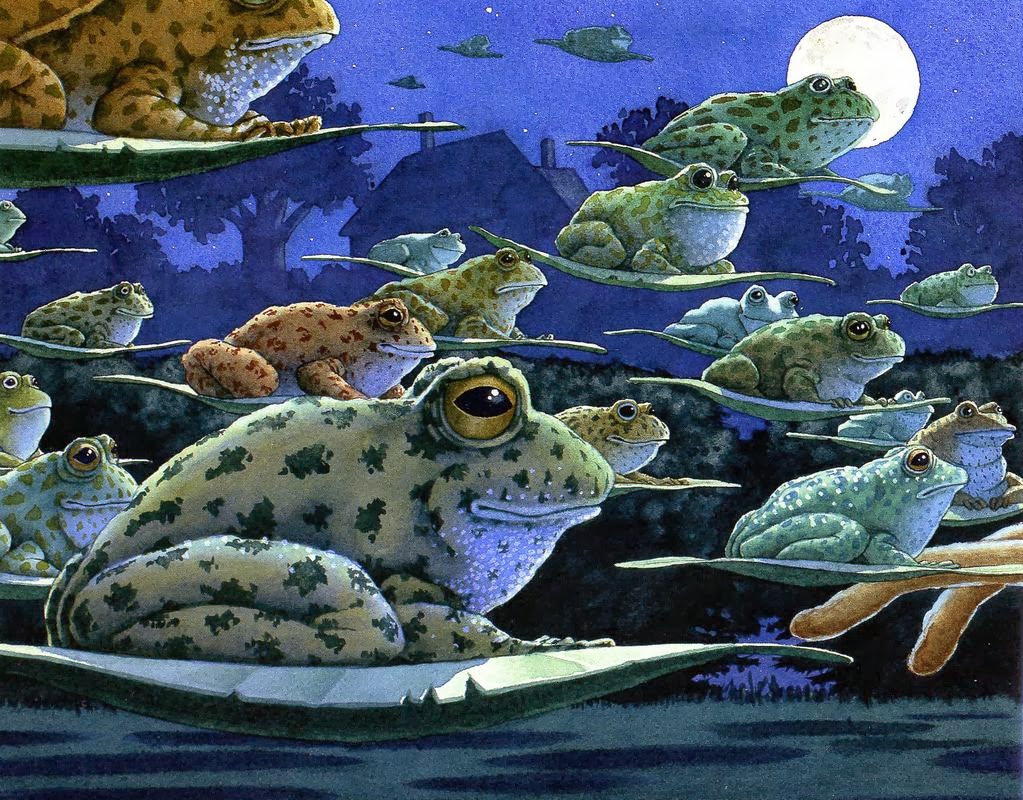 “At least as often as people ask me where I came up with the idea for the book, they want to know, “Why Tuesday?” When I decided to punctuate the story with the times of the day, it became clear that the mysterious element had to do with the particular day of the week when these strange things happened. So I tried to decide what the funniest day of the week was. I immediately discounted the weekend; Saturday and Sunday had too many connotations, as did Friday. Monday was next to go, being the first day of the work week, which left Tuesday, Wednesday, and Thursday. Wednesday’s spelling had always bothered me, so it was out. Thursday was all right, but the more I said “T-u-e-s-d-a-y,” the more I like the “ooze” quality it had. It seemed to go with frogs. 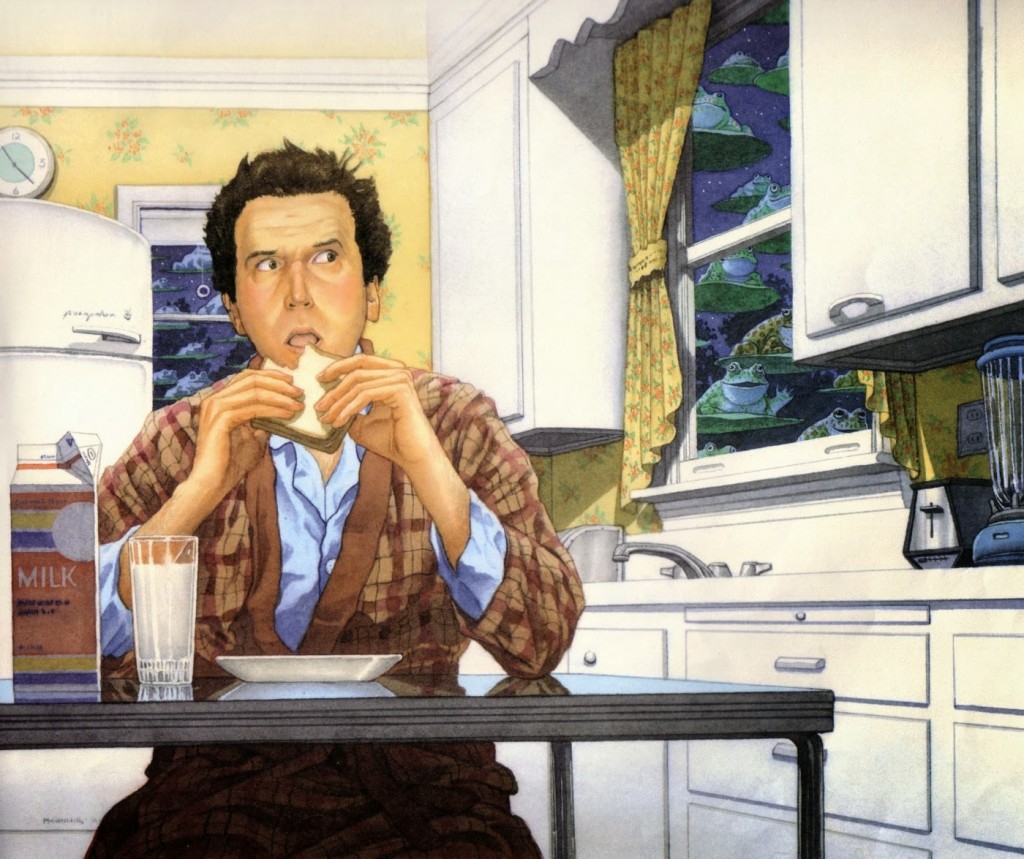 A wordless book offers a different kind of an experience from one with text, for both the author and the reader. There is no author’s voice telling the story. Each viewer reads the book in his or her own way. The reader is an integral part of the storytelling process. As a result, there are as many versions of what happened that Tuesday night as there are readers. For some, the dog in the story is rightfully defending his territory against amphibian invaders, and their sympathy lies with the dog when the frogs get the best of him. For others, the dog is a humorless bully who gets his comeuppance. As the author of a wordless book, I don’t have to concern myself about whether the reader’s interpretation of each and every detail is the same as mine. My own view has no more, and no less, validity than that of any other viewer. Since my intent was for the book, as a whole, to make people laugh, all that matters is that the pictures are funny. 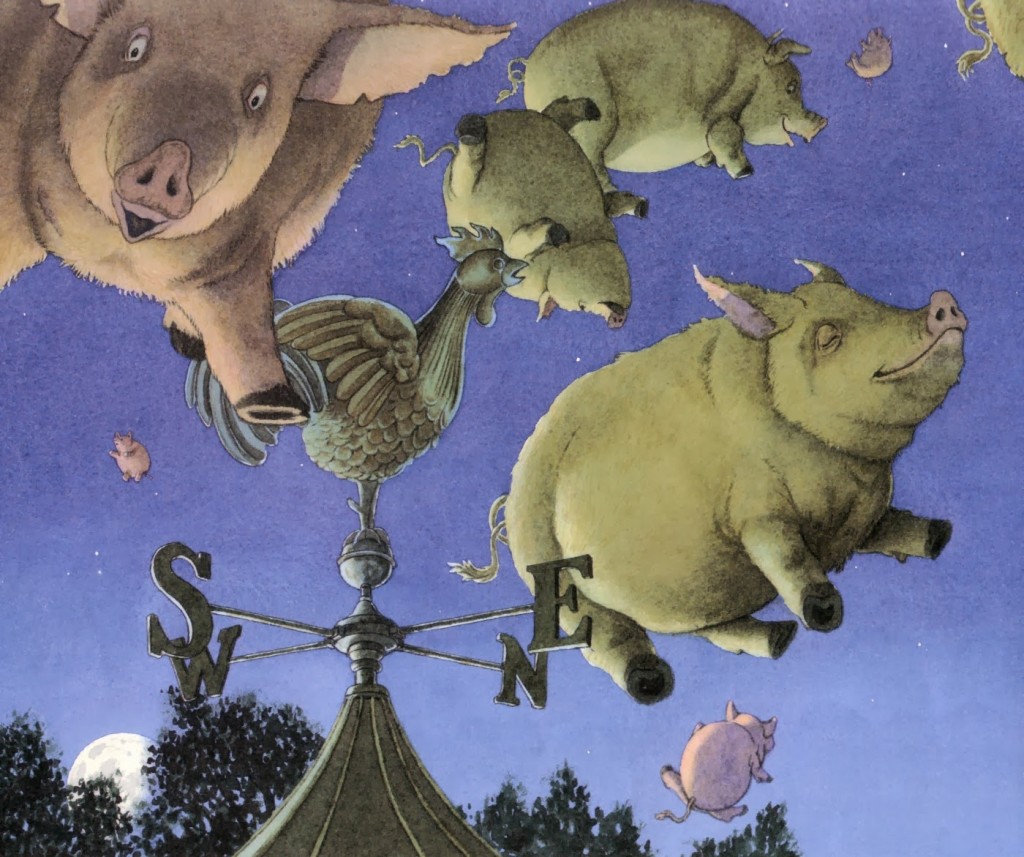 A series of individually funny pictures, however, does not necessarily add up to a successful story. The book was very carefully plotted, and details were developed in ways that move the story forward as logically as possible, from the full moon that rises slowly in the sky that first Tuesday night, to the gibbous moon that appears a week later at the end. By placing my characters in the context of a familiar reality, I hoped to entice readers to take that great leap of faith and believe that frogs, and perhaps pigs, too, could fly—if the conditions were just right.”