I woke up at 5 am, riddled with a sense of shame for my last post. I got online and deleted my Facebook link to it (hoping the few people who saw it before I did that wouldn’t notice). Then I went to my Instagram page to delete there too… but there was already too much interaction there; I didn’t want to “gaslight” those people and deny that it ever existed. The article will stay active on my site. So I forced myself to just let it be a lesson to me and move on.  Still working on that… which led to this.

What am I getting at here? Why was I embarrassed of a post called “Christian Music That Doesn’t Make Me Vomit”?  Because it wasn’t honest. It was a little bit loose and the tiniest bit incendiary (I went in and edited some of my more raw statements… ugh). I don’t want to be like that. I don’t want to use this platform to generate anything remotely inauthentic. The article content wasn’t so much the problem… but there are 100 other titles I could’ve used to be more considerate and thoughtful. Not just given way to my brash hyperbole that I know sounds more interesting.

I blame it partially on the wine. Drinking opens up thought channels and there’s often an thinner-than-gossamer thread I’m able to pick up that leads to some really productive writing. However, drinking also leads to the unfiltered side of people too (in vino veritas, after all) . And I think culturally, we like to celebrate that: “Be Yourself!” “Tell it Like it Is” “You Only Live Once,” etc. Society praises writers, artists, performers for being raw or unedited, as if we are trying so hard to get back to our liberated, primal selves. Virtue and Restraint get the finger and Crass and Vulgar get the red carpet and 5,000 “likes.” I reject this. There have been a number of writers I used to follow pretty closely that I can’t follow anymore. They sold out. They started using their voice to produce cheap, intelligent-sounding material that was more bitter-snark than gift-honoring. (To be clear, I love good snark! There absolutely is a time and place for it, but this is not what I’m referring to with these writers.)

While I’ve fallen prey to my ‘lower self’ a few times by publishing something I later regret, (usually, it’s fears of over-sharing that cause me to backpedal and delete… but occasionally, it’s because I’ve been more flippant or raw than I’d like to be), I only sometimes delete these things. I have left things up as a sort of “Badge of Shame” to myself on social media because I want to be reminded of my frailty in this regard. I can scroll through my social media feeds and think once or twice “Eesh… I probably shouldn’t have posted that.”

Why not? What’s wrong with being “real”? Well, in my opinion, being “real” isn’t about cultivating an artificial perception of yourself to people, but it is about putting forth your better side and not entertaining your lower side. There is no glory in being publicly unfiltered. The glory is in mastering ourselves, our inclinations and egos. Being authentic isn’t waving around your list of music that “doesn’t make you vomit”… or “10 fashion trends I’d like to violently kill.” (it’s not written but sits in the corner of my head…) Authenticity is about plunging the depths of who we are called to be. It is not about splashing in the shallow mud puddles of unfiltered thoughts and expressions. 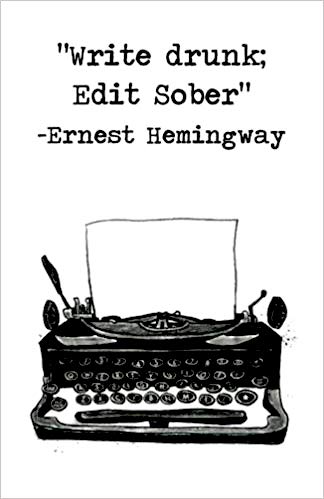 Hemingway was spot-on when he said what he did about writing… only people can be drunk on more than just wine. They can be be drunk on anger, despair, lust, greed, pride… and the like. I normally have a 24 hour waiting period after I write something before I click “Publish” (there is a folder on my computer of unedited scraps that won’t see the light of public day until I have a chance to go through them) just so I can fine tune it and question my motives. By I bulldozed past that in my cheeky zeal with that last article.

We should all want to be fully and authentically human. Left to our own unfiltered devices, humans muck it all up with bravado or eccentricity and call it ‘being real’. But even if it’s “real”, it’s not necessarily true.  But by pausing, reflecting on our motivations for speaking, writing, sharing, etc… by making sure our hearts are ordered properly, we can access the most real and most true part of ourselves that were created in the image of the Father. That’s the authenticity I long for…

4 thoughts on “Truth Telling and Being Human”