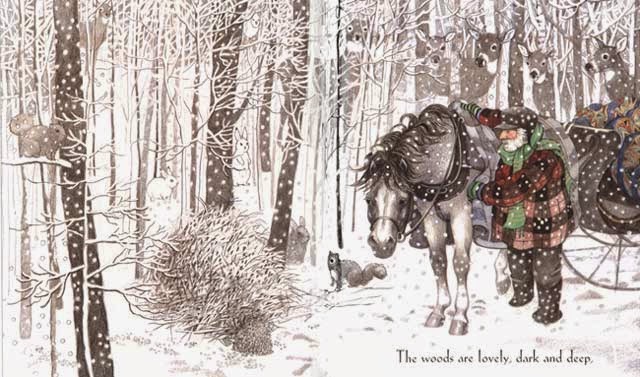 I’ve been thinking a lot about cadence and pacing in storytelling lately.  So many good things about that I want to discuss but I’m saving my thoughts for an article in the next issue of Soul Gardening.  So, you’ll have to wait for publication to hear all about it.

In the meantime, I received a little affiliate bonus again and I want to give away a beautiful book to someone: Stopping By Woods on a Snowy Evening. The book is illustrated by the fantastic Susan Jeffers… who breathes life into the delightful Robert Frost poem.

I chose this book for a couple reasons:

2- This book is a perfect example of the importance in savoring the words on a page and letting them hang suspended in the air for a bit before turning the page.

3- I love books that are able to serve in making poetry very easy and accessible to children.  Using picture books is a great way to acclimate young ones to the study of, but more importantly, the enjoyment of poetry.

So there’s that.  I’ll pick a winner this Friday in some random but unscientific way.  To enter, just comment please with whatever it is you’d like to say… 🙂

I saw A Home for Mr. Emerson randomly at the library and grabbed it up immediately.  What a find!  I use picture books heavily to teach history/science/pretty-much-anything and after reading this book, I decided to change up my homeschooling plan just a bit this fall to make sure and include Ralph Waldo Emerson as a featured poet—all because of this book. 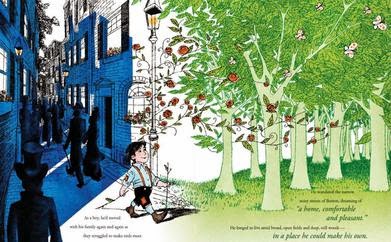 So many biographies fall flat with cartoony, digital pictures; others have long, dry text that reads like an encyclopedia entry. But this book does what all picture books should aim to do: tell a good story and illustrate it well.  It’s that simple… and that difficult. 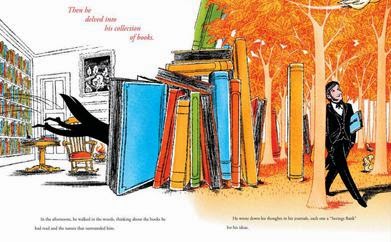 I really didn’t know much of anything about Emerson but this book has all the necessary elements to serve as an educational spine and build out from there.  A real story (complete with a beginning, middle, and end—not just a telling of his life), quotes from his writings, fantastic, appealing pictures to delight young and old, and a full page of biographical notes in the back for further research. 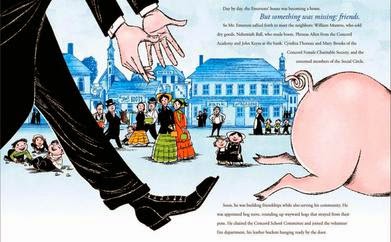 Yet another ‘bonus’ element of the book is the underlying message about how important it is to build the life you dream of, connect with your community and find sanctuary in your home.  I also had no idea that this team of Barbara Kerley and Edwin Fotheringham had produced 3 other biographies (Those Rebels, John and Tom, What To Do About Alice?, and The Extraordinary Mark Twain) that I am adding to my check-out list immediately. Knowing how important it is to have the right illustrator for the right text and vice versa, I can say with confidence that this duo is a match made in picture book heaven.  Kerley has written other non-fiction titles and her Walt Whitman book deserves accolades of its own.  Those illustrations are rich and realistic—great for that book. But  there’s something about the chemistry of Kerley/Fotheringham that I personally really love. 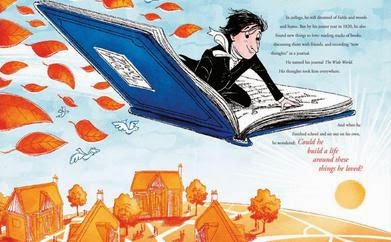 We didn’t mean to actually BUY anything at this particular thrift store; we always pass it up to go to the one in the next town over which has a much better selection.  But we had a few minutes to kill and oops, $90 later… 10 of those dollars were spent on these 13 books. (The other 80 went toward two pairs of winter boots, a maternity shirt, dress shoes, shirts, a rockin’ Burl Ives record, three games, a skirt, building/shop books, gloves and a bike helmet if you must know)

So surprised and pleased at this happy handful of children’s books.  Just posting this picture to inspire and remind you all to seek out picture books second hand: 90% of my ‘healthy’ library are now thrift store/garage sale finds… less than a buck a piece usually. I’m not going to add many notes except I already had some of these so I either saw they were in excellent shape and bought them as gifts or I wanted to replace my beat-up paperback versions. Super excited especially to find the Poetry for Young People series book for Kipling, whom we are studying next term, a mint hardback of James and the Giant Peach, which will be gifted to my almost 7 year old on his birthday in a couple weeks, another Billy and Blaze book, which are the best books for horse loving BOYS, and a fresh replacement copy of our well-loved board book, Harry the Dirty Dog. 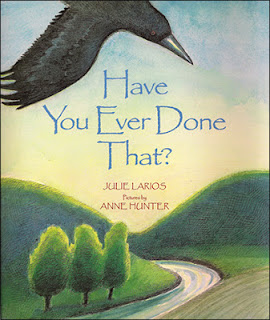 Bring on summertime!  I’ve been wanting to write about some titles to accompany my Top Ten Summer Books list but it sure doesn’t feel like summer around here yet! I’m writing this from a chilly house, wearing a long gray sweater and leggings under my skirt.  It’s drizzling gray outside. Such is the Puget Sound life. Yeah,  I’m ready for some sun already.  Have You Ever Done That? by Julie Larios is a lovely book to get you in the mood.  Evocative language.  Read it sweet and slow and soak it up.  It’s not so much a story as a poem of questions… and the illustrations by Anne Hunter are so simple and childlike.  Perfect for this text.

Have you ever slept outside on a hot summer night? Everything looks different in the moon’s strange light.  The trees seem to whisper so you bravely whisper back.  Outside at night.  Have you ever done that?

… and weird kids love Joyce Sidman, self included.  Especially when she’s paired with the talented Beth Krommes. I really enjoyed reading Sidman’s recent article entitled Why I Write Poetry. Take some time to explore Sidman’s website where you can hear her read some of her poems, get ideas for poem starters, and read submissions from children everywhere… it’s a nice place on the web!  And here is a little trailer preview of the 2011 award winning book Swirl by Swirl: Spirals in Nature

for those who are unfamiliar.

New Zealand has contributed to the world in a fine way. It gives us such delights as excellent wool, scenery from the Lord of the Rings movies, and of course Russell Crowe. (Swoon to some of my favorite movies of his: Cinderella Man, Gladiator, and more recently: The Next Three Days) Something must be going right in that “other” (smaller, more expensive) place down under.

But this country has born to us a superb author as well who often escapes the notice of millions of well meaning booklists that I’ve read: Lynley Dodd. Lynley Dodd is best known for her mischievous, bumbling dog: Hairy Maclary. Her books are each a rhyming masterpiece and her adjectives–be they real words or not– are sizzling, stunningly, superb. Indeed, if one was ambitious, these books could be used as vocabulary units all on their own. Joining Hairy Maclary are other snaffling creatures like Slinky Malinky, Zachary Quack and my favorite: Schnitzel Von Krumm. Isn’t that a glorious name?! Let’s indulge ourselves again: Schnitzel Von Krumm.

As if being a talented writer and poet isn’t enough, Dodd illustrates her own books too. While her artwork isn’t necessarily the masterpieces of some, it is an exactly perfect accompaniment to the text. Indeed I can not envision someone like Barbara Cooney or Robert McCloskey being able to capture the antics of her animals as well as she does.

In New Zealand, children there were once able to watch animated versions of Lynley Dodd’s books on television. I’ll post an example simply so you can get an idea of the text, not because I’m a fan of animated story books. In fact, keep in mind that these books weren’t MEANT to be cartoons and as such, the speed and cadence with which the voice-over is narrating is all wrong. It comes out much smoother and more flowing from a kind hearted mother holding the hard copy book, especially if she’s able to mimic some kind of European accent. I’ve done it in English, German and Irish accents so far… I may find it more amusing than my kids but just you try it: there’s just something delicious about Dodd’s cadence and word choice that begs for an irregular voice. So get thee to the library and place some books on hold and laugh for me when you meet the likes of Bitzer Maloney, “all skinny and bony”…