“Do you think there are sharks in the sea?” asked Sam. “Have you ever seen one?”
“Just a little one,” said Stella, “with an eyepatch.” 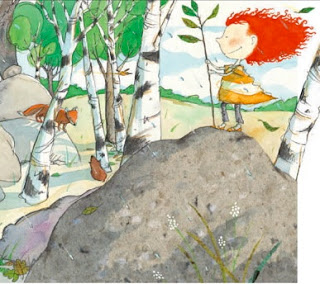 If you know not Stella, it’s time to introduce yourself.  She’s a lovely little ginger spitfire who treks all around with her wee brother Sam at her heels. The stories don’t have much of a plot; they exist to give a peek into the world of young children. Sam asks lots of questions about life. Stella allows you to listen in on her answers.  Their dialogue is fantastic.

“Look,” said Sam, “some clouds just landed in that field.”

“Those aren’t clouds, Sam. They’re sheep.”
“Aren’t sheep dangerous?” asked Sam.
“About as dangerous as woolly blankets,” said Stella.
I’ve read every Stella book so far and having a little carrot-top daughter myself (who comes complete with her own toddling brother!) I was compelled to purchase the treasury of Marie-Louise Gay’s works on her as an upcoming gift for the little lass. 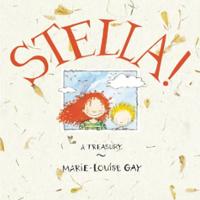 Stella!: A Treasury is one of those great compilations that does NOT sacrifice the individual stories either through abridgment or picture size/quality. Stella, Queen of the Snow; Stella, Fairy of the Forest; Stella, Princess of the Sky and When Stella Was Very, Very Small are all there. And this is a good thing since a couple of those titles in hardback are already out of print. What an insult! Skip the hunt for individual titles and get this anthology! There is apparently a Stella and Sam cartoon on Canada’s Disney channel and it looks like the animation is spot on… (It’s really neat to read about the author detailing how this came to be here.) and there are some downloads coming soon on the author’s website that look like they could be a lot of fun.  In addition to Stella, Gay has a few titles with Sam as the hero now as well as some other items. Any way you have her, Stella is good for the child in any of us.