A theme that I’ve been thinking a lot about this year is the concept of disordered martyrdom. It’s the idea that, while motivated with pious intentions, we can deform the concept of good, holy sacrificing to the point where it becomes an unhealthy scar on our human dignity. And then it really subverts the good we are trying to accomplish by ‘shutting up and bearing our cross’. I hope to develop my thoughts on this in time…

But one tangent related to this has to do with self esteem. So many of us, have allowed a weird cancer of an idea grow in us that having a low self esteem is the preferable path to holiness. But thinking that you are a worthless waste of a human being or a complete and hideous failure is not holy… it is not humility. True humility recognizes ones weaknesses as coming from self and one’s gifts as coming from God. To deny the gifts or skills or good that He has given, is in a sense to deny the goodness of God who can change all hearts. More importantly, it’s to deny the imprint of the divine that is innate in every human being who was “created in the image and likeness of God.”

When someone tells you that you are a good singer, don’t scoff and deny it. Smile graciously and say thank you. When someone tells you that you have beautiful eyes, don’t roll them in sarcastic disbelief; thank them and think (or say!) “To God be the glory!” Our disordered sense of humility wants to shirk off compliments or cheapen the words we hear. I think this unfortunate and I see it all the time in my Christian brothers and sisters… and truth be told, self. 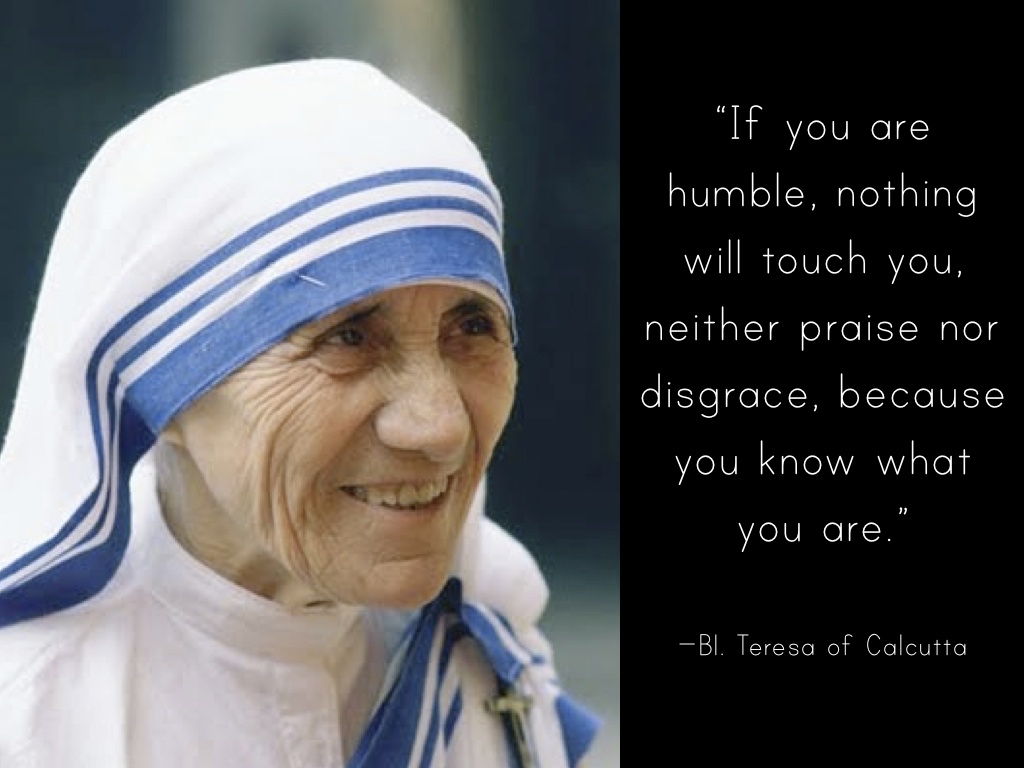 I’m not a big proponent of new age ideas like “self love” and “don’t change for anyone” and “follow your dreams” and “you are perfect as you are.” But there is a disturbing opposite to this extreme also— the one that views self as a heaping pile of dung. In a way, we have to learn to crawl outside of ourselves and view our personal reality objectively, or as if we were looking at a friend of ours: “This person was called by name by the Eternal God of Creation. This person has dignity and is loved and is valuable beyond measure.”  To think anything less than that is in a way, a sort of a stunted, distorted faith… one that has allowed the lies of the world to define who we are.  But we are not of this world. We are children of God and our dignity rests in that alone.

I’ll leave off with this thought, perfectly expressed by Henri Nouwen in his book The Return of the Prodigal Son: A Story of Homecoming, which I read in a book by my very favorite, contemporary spiritual writer, Fr. Jacques Philippe Interior Freedom (a must own… like all his titles):

For a very long time I considered low self esteem to be some kind of virtue. I had been warned so often against pride and conceit that I came to consider it a good thing to deprecate myself. But now I realize that the real sin is to deny God’s first love for me, to ignore my original goodness. Because without claiming that first love and that original goodness for myself, I lose touch with my true self and embark on the destructive search among the wrong people and the wrong places for what can only be found in the house of my Father.

You are loved. You are valuable. You are worthy.