Looking out my kitchen window this morning made me drop the dish I was washing and gasp. My raspberry plant had suddenly grown— or I suppose it was just being seen for the first time in months— and the tiniest of white buds were making an appearance.  Running outside to verify what I was seeing confirmed the marvel.

This is the ‘botany of hope.’

This is literally post-traumatic growth.

My raspberry is older than I am, see. As children, my siblings and I adored the raspberry patch my parents cultivated for decades. That spot of the yard was both a hide-and-seek place and a fort-building place and a peaceful place of poking at bugs and stealing mom’s berries, leaving evidence rather obvious on our lips and hands. Some years back, against my protests, my dad decided to cut down the tall evergreens and mom pulled out the raspberries to make the front of their house more… I don’t know… appealing or contemporary or open… or something I can’t really understand.  In 2017, my sister-in-law  (much more of a wizard with plants than me) gave me a tiny, 5 inch baby remnant of the raspberries she’d kept aside in a cheap, disposable plant container.  I was grateful but dubious, assuming I’d kill it.

That plant sat outside in my driveway for nearly two years, sitting on top of a plastic grocery bag in its generic plastic holder. It endured rain and hail. Windstorms. 14” of snow. Reduced to just a bare stick or two for a long time, I ignored the plant as life did not cease its punishment during this period…

Then my aunt came over last year and asked me to please love it. I simply had to put in the dirt and sunshine… it would be fine.

I didn’t believe her. The plant was dead to me. While it symbolized “roots,”  I had already gone through my mourning and moved on.

But, there was a still moment in early 2019 when I bought a couple planters and attempted, through my feelings of intimidation, to grow some produce. The bell pepper failed. The cherry tomatoes briefly performed but died early. The lettuce was underwhelming. The carrots were stunted and deformed. And the radishes were eaten all through by ants. My 40 year old raspberry plant grew a shoot or two of green but nothing. Returned to sticks over the winter. It was confirmed: I’m a gardening failure. Or at least… I have a lot to learn still.

But here’s this! My raspberry of glory! It’s almost two feet tall, healthy, beautiful and has a history infused with deep meaning for me.

I am hoping to return to my roots this summer…  and it will be such a joy to return this raspberry to its native land with me.

This plant makes me profoundly happy. And I genuflect at the mystery of it all. 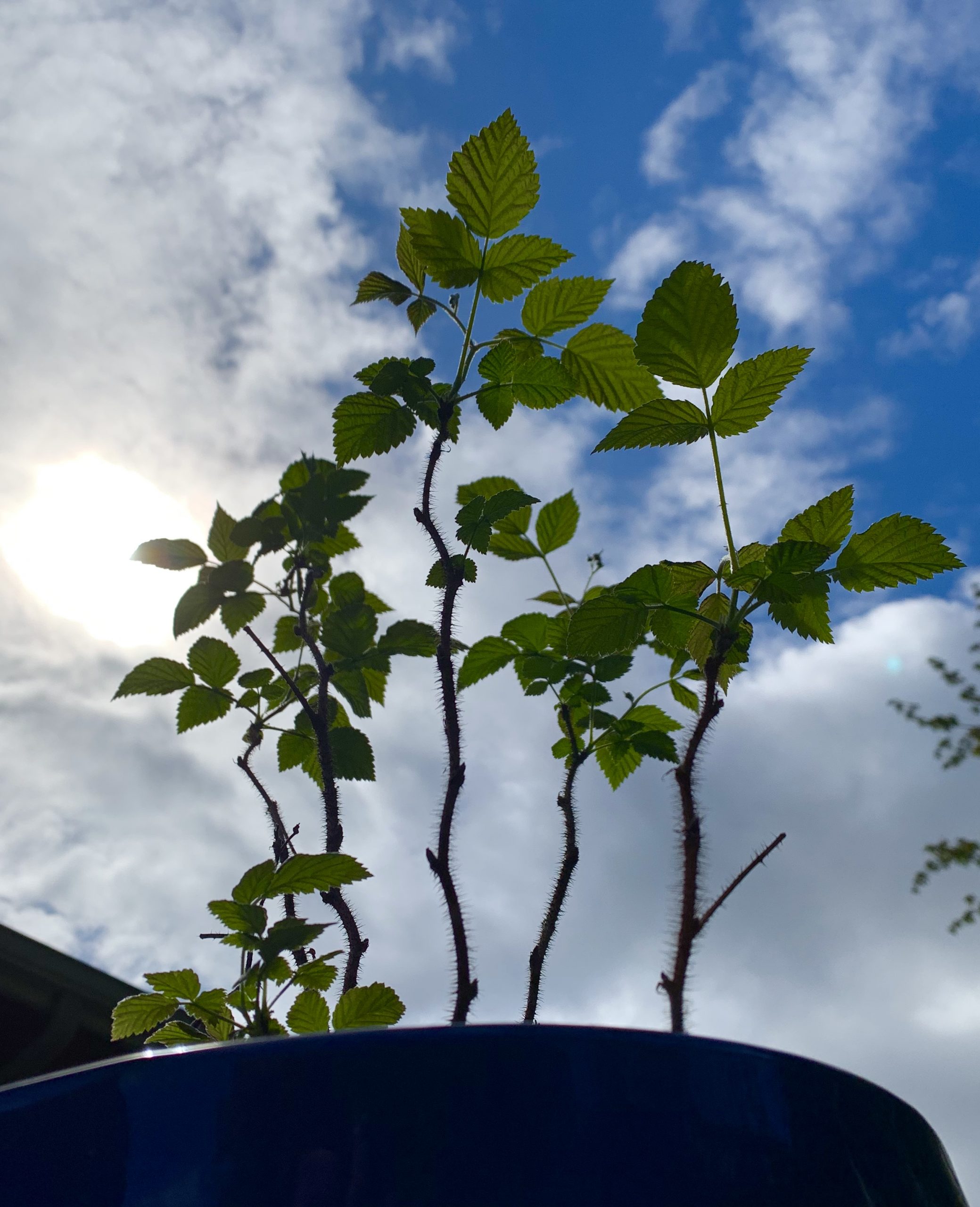