Oh so very much to say… So many good books to discuss… Such a busy month though. I am turning this post over to G.K. Chesterton with a section from Tremendous Trifles, (Free on Kindle!) courtesy of Project Guttenburg.  It’s a superb read… The tale he references at the end is free to read online and is sometimes called The Boy Who Went Forth to Learn Fear:

I find that there really are human beings who think fairy tales bad for children. I do not speak of the man in the green tie, for him I can never count truly human. But a lady has written me an earnest letter saying that fairy tales ought not to be taught to children even if they are true. She says that it is cruel to tell children fairy tales, because it frightens them. You might just as well say that it is cruel to give girls sentimental novels because it makes them cry. All this kind of talk is based on that complete forgetting of what a child is like which has been the firm foundation of so many educational schemes. If you keep bogies and goblins away from children they would make them up for themselves. One small child in the dark can invent more hells than Swedenborg. One small child can imagine monsters too big and black to get into any picture, and give them names too unearthly and cacophonous to have occurred in the cries of any lunatic. The child, to begin with, commonly likes horrors, and he continues to indulge in them even when he does not like them. There is just as much difficulty in saying exactly where pure pain begins in his case, as there is in ours when we walk of our own free will into the torture-chamber of a great tragedy. The fear does not come from fairy tales; the fear comes from the universe of the soul. 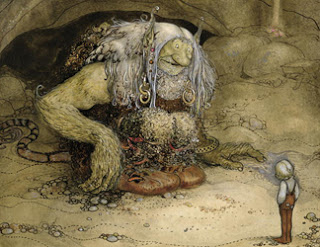 …..
The timidity of the child or the savage is entirely reasonable; they are alarmed at this world, because this world is a very alarming place. They dislike being alone because it is verily and indeed an awful idea to be alone. Barbarians fear the unknown for the same reason that Agnostics worship it—because it is a fact. Fairy tales, then, are not responsible for producing in children fear, or any of the shapes of fear; fairy tales do not give the child the idea of the evil or the ugly; that is in the child already, because it is in the world already. Fairy tales do not give the child his first idea of bogey. What fairy tales give the child is his first clear idea of the possible defeat of bogey. The baby has known the dragon intimately ever since he had an imagination. What the fairy tale provides for him is a St. George to kill the dragon. 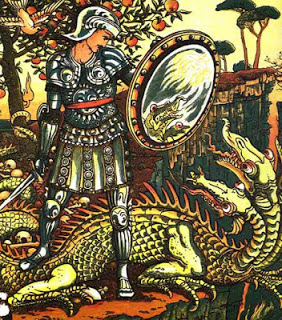 Exactly what the fairy tale does is this: it accustoms him for a series of clear pictures to the idea that these limitless terrors had a limit, that these shapeless enemies have enemies in the knights of God, that there is something in the universe more mystical than darkness, and stronger than strong fear. When I was a child I have stared at the darkness until the whole black bulk of it turned into one negro giant taller than heaven. If there was one star in the sky it only made him a Cyclops. But fairy tales restored my mental health, for next day I read an authentic account of how a negro giant with one eye, of quite equal dimensions, had been baffled by a little boy like myself (of similar inexperience and even lower social status) by means of a sword, some bad riddles, and a brave heart. Sometimes the sea at night seemed as dreadful as any dragon. But then I was acquainted with many youngest sons and little sailors to whom a dragon or two was as simple as the sea. 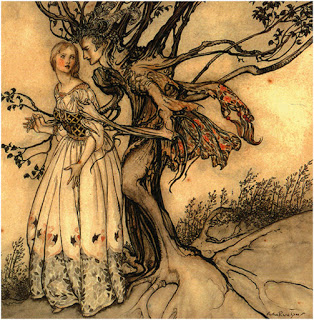 Take the most horrible of Grimm’s tales in incident and imagery, the excellent tale of the “Boy who Could not Shudder,” and you will see what I mean. There are some living shocks in that tale. I remember specially a man’s legs which fell down the chimney by themselves and walked about the room, until they were rejoined by the severed head and body which fell down the chimney after them. That is very good. But the point of the story and the point of the reader’s feelings is not that these things are frightening, but the far more striking fact that the hero was not frightened at them. The most fearful of all these fearful wonders was his own absence of fear. He slapped the bogies on the back and asked the devils to drink wine with him; many a time in my youth, when stifled with some modern morbidity, I have prayed for a double portion of his spirit. If you have not read the end of his story, go and read it; it is the wisest thing in the world. The hero was at last taught to shudder by taking a wife, who threw a pail of cold water over him. In that one sentence there is more of the real meaning of marriage than in all the books about sex that cover Europe and America. 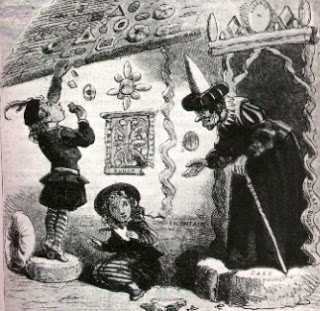