Should we not abjure our pettiness, open our libraries, and let our most valued possessions fly from house to house, sharing the wealth.  Certain clerics with vows of poverty did this  Inside their books was printed not EX LIBRIS but AD USUM–for the use of– indicating that it is better to lend than to keep, that all life’s gifts are transitory.

I agree with a materialistic sort of agony…  this extended bit is also by Rosenblatt; I found it in a book I’m reading: 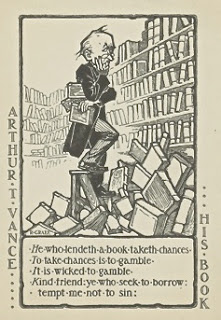 The custom of borrowing books confutes nature. In every other such situation, the borrower becomes a slave to the lender, the social weight of the debt so altering the balance of a relationship that a tempo­rary acquisition turns into a permanent loss. This is certainly true with money. Yet it is not at all true with books. For some reason a book borrower feels that a book, once taken, is his own. This removes both memory and guilt from the transaction. Making mat­ters worse, the lender believes it, too. To keep up appearances, he may solemnly extract an oath that the book be brought back as soon as possible; the borrower answering with matching solemnity that the Lord might seize his eyes were he to do otherwise. But it is all play. Once gone, the book is gone forever. The lender, fearing rudeness, never asks for it again. The borrower never stoops to raise the subject.

Can book borrowers be thwarted? There are attempts. Some hopeful people glue stickers that read EX LIBRIS to the inside covers (clever drawings of ani­mals wearing glasses, adorable yet pointless, and the name of the owner: “EX LIBRIS Rosenblattimus”) ‑ as if the presence of Latin and the imprint of a name were so formidable as to reverse a motor reflex. It never works. One might try slipping false jackets on one’s books ‑ a cover for Cry the Beloved Country dis­guising a book actually entitled Utility Rates in Ottawa: A Woman’s View.
There’s no spectacle that is as terrifying as the sight of a guest in your house whom you catch staring at your books. It is not the judgmental possibility that is frightening. The fact that one’s sense of discrimination is exposed by his books. Indeed, most people would much prefer to see the guest first scan, then peer and turn away in boredom or disapproval. Alas, too often the eyes, dark with calculation, shift from title to title as from floozie to floozie in an overheated dance hall. Nor is that the worst. It is when those eyes stop moving that the heart, too, stops.
The guest’s body twitches; his hand floats up to where his eyes have led it. There is nothing to be done. You freeze. He smiles. You hear the question even as it forms: “Would you mind if I borrowed this book?”
Mind? Why should I mind? The fact that I came upon that book in a Paris bookstall in April 1969 ­the 13th, I believe it was, the afternoon, it was driz­zling ‑ that I found it after searching all Europe and North America for a copy; that it is dog‑eared at pas­sages that mean more to my life than my heartbeat; that the mere touch of its pages recalls to me in a Proustian shower my first love, my best dreams. Should I mind that you seek to take all that away? That I will undoubtedly never get it back? Then even if you actually return it to me one day, I will be wiz­ened, you cavalier, and the book spoiled utterly by your mishandling? Mind?
“Not at all. Hope you enjoy it.”
“Thanks. I’ll bring it back next week.”
“No rush. Take your time.” [Liar.]
This excerpt is from Bibliomania, a one‑man show written and performed by Roger Rosenblatt and staged at New York’s American Place Theatre in 1994.


*****
Here is a great little bit of gratitude from author Christopher Morley upon his lent items being returned:


When I loaned this book, I deemed it as lost; I was resigned to the business of the long parting; I never thought to look upon its pages again. But now that my book has come back to me, I rejoice and am exceedingly glad! Bring hither the fatted morocco and let us rebind the volume and set it on the shelf of honor, for this my book was lent and is returned again!

The worst part about lending a book to someone, in my opinion is not that you may never see it again.  It’s not even that it will return to you torn or stained or chewed by toddlers or dogs.  The worst part about lending a book to someone is if they return it to you and you ask them with a quivering eagerness: “What did you think?” And for a brief moment all the cosmos of the heavens hold their breath in suspense and the world pauses waiting to hear the judgement of whether or not the new, beautiful reality has set in on this reader…  “It was okay.” Comes the unmistakable slap in the face. And Atlas buckles under the weight of the world just an inch, and the heavens sigh in a chasm of despair that yet another cold, raisin -hearted individual has failed to opened anew…