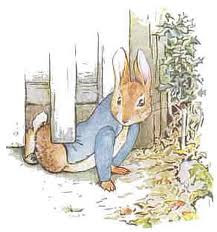 … well in my opinion anyway. So I’ve been holding out for the oh so unattainable but superb, entire, original Peter Rabbit Collection

by Beatrix Potter for a long time. I’ve resisted picking up these wee books piecemeal at thrift stores because I was bound and determined to have the whole collection in prime condition in order to pass on to future generations. Somehow a spare $100 was never to be found to splurge on the collection. Then I went to Costco and found the next best thing: the same collection, books 1-23, complete and boxed for $25. (This is what it looks like on Amazon.) I rubbed my eyes in disbelief. There are only a couple differences (and they are only significant for true bibliozealots): the size of the books and the formatting of the illustrations are changed. (The original has text on one page and picture on the other– these stack them up like contemporary story books.) Miss Potter published the original books in a small size for a few reasons:

The small format books are indeed still superior; it’s always good to read a book in the way the author intended it to be read, but since the hundred dollar collection just wasn’t happening anytime before my kids went to college, I was willing to sacrifice the size and stilted formatting for a $75 discount on a collection that was still worthy to be called “heirloom.” We gifted this collection to my young daughter in hopes that she will grow up knowing and loving the world of Peter Rabbit.
Considering Peter Rabbit is among the bestselling books of all time, I’m pretty sure most of you are familiar with the stories. Some brief elaboration for the rest of you:
Beatrix Potter was a writer, artist and naturalist who initially wrote The Tale of Peter Rabbit for the son of her former governess. The story is probably the first children’s book written with a sort of imperfect protagonist as the star: Peter Rabbit is a rather naughty rabbit who gets into mischief in the garden and subsequently into trouble with his mother. The artwork is charming, intimate and drawn from a perspective that brings children into the fear of Mr. McGregor etc. 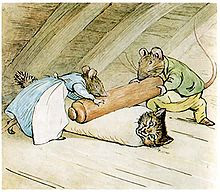 The books in Potter’s collection are indeed curl-up-and-read style… they aren’t the quick “git-r-done” books you would go to for a brief story that just needs to get-read-in-order-to-placate-a-child-but-you-don’t-have-a-lot-of-time-or-patience. (Though, truth be told, there IS a place in children’s literature for such stories and maybe I’ll humor us with a Top Ten list of quickie books at some point.) No, Peter Rabbit and Squirrel Nutkin and Jemima Puddle-Duck must be slowly savored and never rushed. All children should know these characters. I admit that mine aren’t very familiar with the Potter world, due to my insistence on acquiring the full collection before indulging in any of them. But their appetites have been duly whetted ever since a good friend came over and showed them this video telling the frightening Roly Poly Pudding story. Now, they are eager for more on this world. And now, $25 later, I can share it in abundance. Check your Costco out; it may still have this bargain available! Otherwise, save up for the original set. Or get this condensed version

if you must (but ONLY if you must because as a rule, consolidated books are inherently inferior). Either which way, get some Beatrix Potter in your collection!
“Don’t go into Mr. McGregor’s garden: your Father had an accident there; he was put in a pie by Mrs. McGregor.”-Mother Rabbit in The Tale of Peter Rabbit

1 thought on “The Best Christmas Gift Under the Tree”