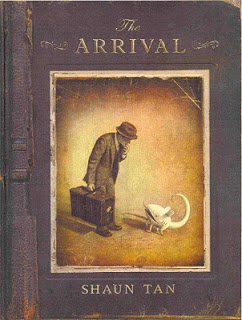 The Arrival by Shaun Tan is in a class of its own. This is what is called a ‘graphic novel’ (not a comic book) and you’ll not find it in the picture book section. The difference between a graphic novel and a picture book is that the former is closer to a cinema experience than anything else. The author/illustrator has to focus especially on the continuity in between images to make the whole piece ‘flow’ really well. It would be in the young adults section at your library.

I spent the better part of an hour reading this book. Reading might be the wrong word– let’s say feasting. There are no words at all; it is a picture journey that makes it accessible from the very, very young all the way through adulthood. Truly a book for all ages. This artwork is stunning.
The story is about an immigrant who is making his way in a new world and its told in the setting of fantastical, surreal creatures, buildings, foods and skylines. Seems there’s a lot of meaty symbolism in there too… the shadow of a dragon’s tail over the city could mean so many different kinds of physical, political, or spiritual threats. You get a haunting and satisfying feeling that this experience is what true immigrants must’ve felt like back in the day when everything was foreign to them.
Shaun Tan grew up as a half Chinese man in Western Australia and he worked on this book for four years, gathering anecdotes from immigrants, doing research and of course the laborious artwork. His website is an interesting place in and of itself… turns out he also worked as a conceptual designer on the movie WALL-E. You know, I’m not generally a big fan of surreal art; Salvador Dali never did much for me, but Tan’s work on this particular book really makes me want to seek out his other work for a taste of more… 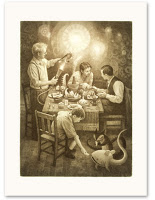 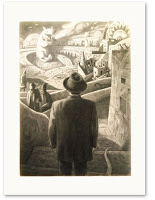 It occurred to me that photo albums are really just another kind of picture book that everybody makes and reads, a series of chronological images illustrating the story of someone’s life. They work by inspiring memory and urging us to fill in the silent gaps, animating them with the addition of our own storyline. -Shaun Tan