A few days ago I made someone cry.  I’ve done this before—certainly we all have through our harmful or thoughtless actions or inactions, or our viperous tongues lashing when they shouldn’t have.

But this time, I made someone cry for no apparent reason.  She was trying to tell me something.  Our relationship was one of brief smiles of acknowledgement before.  But she approached me with trepidation on Friday saying she had something to tell me.  Then she begged for patience and forgiveness while she collected herself.  Breathing deeply she eventually stated what she had come to say: Could I please spread the word that the parish mothers were trying to get together to take turns watching children while the others went into confession?  Some moms, especially in military communities such as ours, never get a chance to be toddler or baby free enough for the sacrament…

I was certain that while she was fighting her tears of trepidation before speaking that she was going to tell me that she accidentally ran over my son in the parking lot or maybe my family had all been gunned down and I was the lone survivor.  I couldn’t fathom what could cause someone such angst in telling me what is a fairly routine thing.

But I intimidated her. And I don’t know why exactly.  I’d like to think I am kind and approachable.  Am I not?!  But I had never made any real efforts in wanting to know this woman. In reaching out to her in a meaningful way. She who is a shy, amiable soul with a few young children saw something in me—that created a distance between us enough to fear our exchange. I can see some external differences in us and in how we compose ourselves but I can not on the surface see a barrier to friendship or conversational ease.

I don’t have it all figured out yet, but I do think it bears important reflection.  How our apparent composure and/or confidence (feigned or authentic) can be frightening to some sensitive souls… steamrolling such people even unintentionally, is a barrier to evangelization. To mercy.  What to d 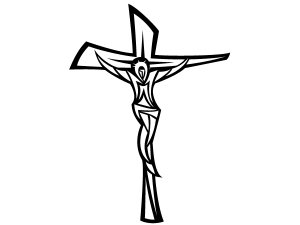 o? Crawl out of my comfort zone even more, every day. Can you imagine if Mother Teresa only sat with the sisters she liked best during lunch.  Only chatted with the sick people who had the most attractive personalities to her?! No. She was magnetic. Living the Gospel has to be a magnetic, deliberate action.  It will be uncomfortable.  And it will require heroic effort. I have to speak to others when I just want to run away or socialize only with those whom I have much in common. I have to branch out, introduce myself, sit at other tables in hospitality hour. I have to be approachable.  I have to stretch my arms past the comfortable point just like Him whose open embrace was nailed on the Cross for all eternity saying “Here I am. I am for everyone.”