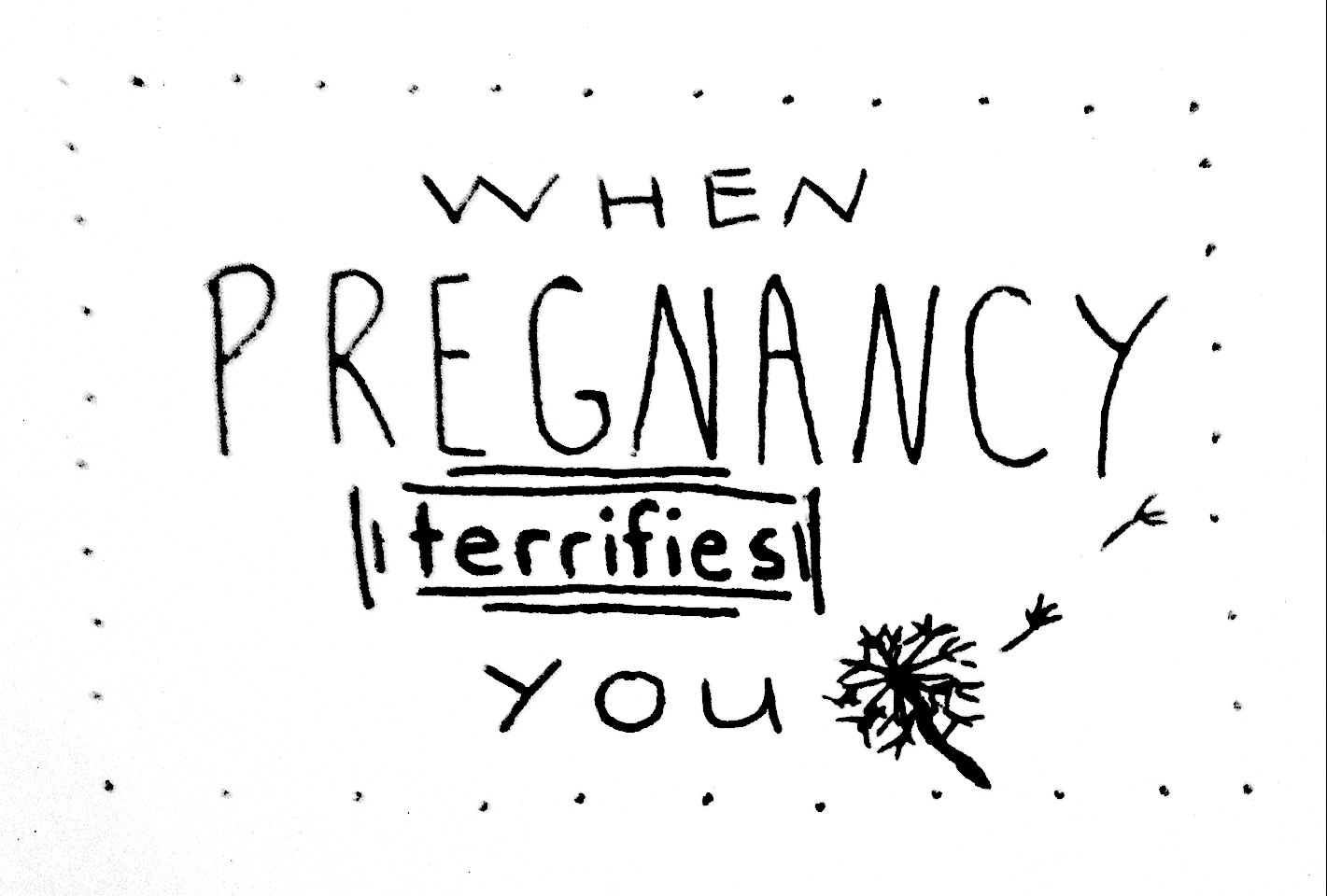 Some of us may be tempted to feel like we are ‘bad Catholics’ if we aren’t feeling over the moon when we see those double pink lines of a new pregnancy. Then when we get around to announcing the baby, and people say “Congratulations!” we are thinking cynically: Yeah, really. But we can’t express our misgivings. We smile politely and make some joke about God’s sense of humor while inwardly feeling devastated. Our fears may be physical, mental, financial, emotional… whatever the case may be, we do NOT want to admit to our good, Catholic friends—much less to our hostile non-Catholic family— that the idea of more children is gut-wrenching.

So we all move along in this faux reality of a Catholicism where being open-to-life means everyone is giddy about being pregnant when it happens. But I think there are many of us living in this reality who have to constantly do some serious internal wrestling, trying to accept God’s will and trying to love yet another baby-on-the-way. The fear is sometimes crippling. We can’t talk about it. Will people think I don’t love my children? That I have a weak faith? That I’m a bad mom?  What about the duty to bear witness to the truth, to set a positive example of the Church’s teaching on openness to life? Yet after the weeks of pregnancy go on, we eventually become reconciled to the idea… and so by the time baby is born, or shortly thereafter, we are in love all over again with this new creation and we can’t imagine our lives any other way. Being horrified at the idea of yet another name-less, face-less pregnancy, is a completely different story than being horrified at another child in your family.

But I often wonder how helpful it would be, if we were a little more honest or vulnerable with our true feelings?! How many of us can raise our hands and say that we are testimonies to the fact that an “unwanted pregnancy” does NOT equal an “unwanted child”? I know I can.

When I became pregnant with my fifth child, I had just gone through two back-to-back miscarriages. I was in a dark place, mentally. The pregnancy was fairly rough on me physically. I didn’t feel a sense of bonding with the baby the entire time. I confessed to my midwife toward the end that I was feeling a “pre-partum depression” if there was such a thing… she said there was. I was terrified to go through labor again and I honestly dreaded his birth. Who could I talk to about this? My husband knew, but didn’t really understand. And I think one or two of my closest girlfriends knew. And while I wouldn’t think it appropriate to dump all this on the general public, I made sure not to share the misgivings, dread or fear I had with my friends and certainly not family members who disapproved of my family size already. I felt guilty. I felt like I was a bad person for feeling such awful things. Who dreads her child’s birth after all? I didn’t want people to think I was crazy, depressed or faithless.

When the time came, I prayed to God to NOT let the baby be born just yet. All the kids had the Coxsackie Virus, and my husband and I were on different communication wavelengths. It was a bad time. Yet, he was ready, right on his due date. I labored silently alone for a couple hours… I had just read something by Blessed John Paul II where he kept encouraging his readers with the word: Corragio! (Courage!) For some reason, that became my prayer, my petition… and I whispered it to myself over and over. It was an awful, intense labor, lots of back pain, lots of emotional blockage. When he finally entered the world, in that last push of courage, agony, blood and water… I finally cried. But it wasn’t over the joy of my new baby. I was weeping in relief that it was over. I couldn’t look at my son. The midwife put him on my chest and I felt his warm, wet body breathing in his first gasps of air. But I couldn’t look at him. I just was thanking God that the labor was over. I wasn’t ready to see him. I didn’t feel ready to love him. But I did. I knew I did, even if I didn’t feel it immediately.

Eventually, we of course, bonded. And in all honesty—despite it sounding trite—that child became the absolute joy of my life. He is the most amazing, lovable baby and both my husband and I truly can’t remember enjoying the babyhood of any of our children quite this much. What miracles God can work on hearts! Who would have guessed, that this little one was once just a dreaded theory… a ‘pregnancy’ for so long?! Others would be ashamed to admit it; it is scary to be vulnerable! It takes corragio to admit the truth! But I want to have that courage. I want people to know the amazing graces showered on my unworthy heart. How can people know the goodness He is capable of, if we can’t reveal a little bit of just how far He’s brought us? How can we testimony to women who are experiencing fear or doubt over an unwanted pregnancy if we are afraid to empathize with them? So often women just want to feel like they aren’t alone. They want to have hope that it will indeed be okay. How can they know that if we aren’t open about living it? As far as they can tell, if you aren’t thrilled about a pregnancy, you will never want your child. What pity! What a lie! The transformation of the heart isn’t just some spiritual assumption people talk about. It’s a living and breathing presence that I believe many ‘open-to-life’ Catholics experience all the time. We have to be more willing to share that glorious hope in our culture of death!

We are now expecting our sixth child. This is the very first time, in all my pregnancies, that I have felt such an immediate sense of delight, hope, joy and wonder at the life inside of me. (Usually pregnancies were met with resignation or some such; I always wished for— but never had— that Hollywood-portrayed instant excitement.) A friend pointed out that the news came right after I finished making a consecration to the Blessed Mother, on the feast-day of Our Lady of Fatima. I’d like to think it was her gift to me—that I can know such an overwhelming sense of happiness at being a co-creator with God. My love for God may be weak. But every now and then, I have moments at looking at my flock of children and think of the ways each of them have brought me closer to Him. Each pregnancy may be a temporary test of faith, but the story always ends the same: each baby born stretches my willingness to surrender a little bit more. Each baby born stretches my capacity to love a little bit more. And each baby born has carved out new dimensions of joy that I never knew existed before. In that, there is truly nothing to fear.